The General Aviation community in Thailand is small, but active, consisting of a handful of flying clubs predominately centered around the Bangkok Area. Thai Flying Club, Eastern Airpark and Pattaya Airpark are to name but a few all located around Pattaya. Phuket Airpark is in the South. Nok Airfield is located in Chiang Mai, North of Bangkok.

Arriving and Departing from Thailand – CIQ

The first place to check for airports of entry and fuel availability is the Thai Department of Civil Aviation AIP which is available electronically here. Apart from Krabi Airport (VTSG), Utapao (VTBU), and Koh Samui (VTSM) the remainder of the Entry/Exit Thai Airports are run by Airports Authority of Thailand (AOT). All of the AOT airport require mandatory handling, and it is expensive in GA terms; USD 700-USD 1,500. Koh Samui, (VTSM) is a private airport owned by Bankok Airways with some eye watering airport charges. Best to be avoided unless cost is no object.

For Bangkok, Don Muang (VTBD) is the main international airport for GA, but there is mandatory handling there, and although the handling fees can be high, the FBO run by Mjets at the airport is to a very high standard. MJets can also arrange handling at Utapao (VTBU)

If you are arriving to Thailand via India, a technical stop in Chittagong, (VGEG) Bangladesh is very efficient and inexpensive compared to India. As of September 2015, both Jet A1 and Avgas were available there, but confirm supply first.

When departing Thailand to the South, Malaysia is generally GA friendly and reasonably priced, as is the GA airport Seletar (WSSL) in Singapore. Wings Over Asia can assist with both Malaysia and Singapore. Generally, self-handling is permitted in Malaysia, but at Seletar, in Singapore  you will need to coordinate with Wings Over Asia since they control any overnight parking and for a fee will run you to the terminal and back to the parking area, which is unhelpfully quite a distance from the terminal.

It is possible for non-Thai registered aircraft to fly domestic legs within the Thai Kingdom, providing you apply for those legs at the same time as the entry and exit permits. It is very difficult to obtain ad-hoc domestic permits after you have arrived.

Some of the domestic airports like Hua Hin (VTPH) and Mae Sot (VTPM) will arrange CIQ on request with prior notice, but expect delays and overtime charges as the officials often have to drive a long distance and may not get called until after you arrive at the airport!

You want to visit Koh Samui. We recommend that you land at Surat Thani (VTSB) domestically and very inexpensive, then catch one of the numerous ferry’s over to the island.

For Phuket. We recommend that you clear CIQ at Phuket International (VTSP), then contact Phuket Airpark for parking. (PPR. Grass 600M runway, outside parking only. Limited AvGas).

For Chiang Mai We recommend that you clear CIQ at VTCC or VTCT, and then contact one of the local flying clubs to see of you can park there. Limited supply of Avgas is available at Nok Airfield by prior notice.

Check the AIP for current fuel availability at the main airports, and be warned that some airports like VTSB, VTSG, VTSS will only sell AvGas by the 50/200 Liter drum, although they will store any unused fuel for you for 30 days. 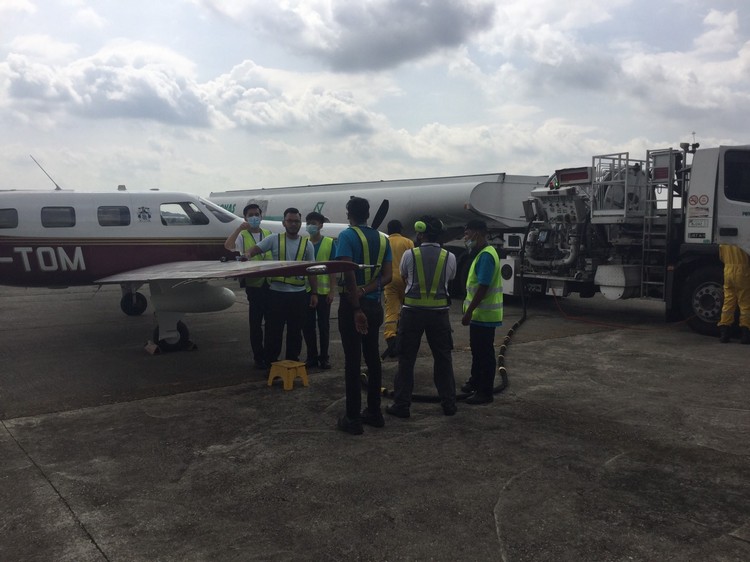 General Declarations (GenDec) rule the aviation paper trail here in Asia. Thailand generally requires a total of 5 copies per leg. If you are arriving as crew you will be permitted a maximum stay of 15 days with use of a GenDec. Generally light aircraft are permitted a maximum of two crew. Do not try to push for more.

Upon arrival at the first Thai airport of entry, you should be handed a stamped copy of your GenDec back by immigration which you must provide as part of the documentation when you leave Thailand or you will be fined for overstay. Your outbound GenDec will also be stamped and you may be requested to produce it at your next destination if it is International (Malaysia, Singapore) as proof of exit from Thailand.

If you plan to stay for more than 15 days in Thailand , insist on a 30 day visa on arrival stamp in your passport, or you will be fined when you leave regardless of what you are told.

Crew are also exempt from airport departure tax. Passengers will pay USD 10 for domestic flights, and USD 20 for international ones.

If you plan any VFR flights, take time to study the airspace around Thailand. On most weekdays the VTD/R (danger or restricted areas) are often active due to military exercises and you will be expected to navigate through the published corridors.

Transiting around Bangkok VFR has a very set series of VFR routes you should familiarise yourself with. This section of the AIP covers it well. You will be asked to report position at the stated reporting points, so plan ahead and load the relevant ones in your GPS ahead of time.

The standard of ATC in Thailand is generally very good providing you stick to the expected international script.

Although you can file VFR flight plans, for 85% of the flight time you will be under positive radar control and you must have a working radio and mode C transponder regardless of the flight rules.

When you are flying VFR you will be repeatedly asked for position reports via your radial and DME to/from a given VOR (normally the departure, next over flight or destination VOR).

The larger airports have a dedicated ATIS frequency, but the majority of domestic airports still broadcast them over the NDB frequency. (Just when you thought you could dispose of that old ADF box eh :-))

By their nature, Thai people are very friendly and generally want to be helpful. The rules in aviation are for the most part strictly adhered to and not corruptible. Do not under any circumstances attempt to bribe an official here. The best you can expect is to win a discussion over the applicability of a charge in your given case. Polite and persistent is the name of the game, as well as knowing when to stop trying.