The Flying Scouts are happy to report that despite a torrid time during Covid-19, the Gibbon Rehabilitation Project (GRP) has not only survived, but reaffirmed its commitment for reintroducing Gibbons back into Chiang Mai Province, where they were once indigenous, until hunted almost to extinction. 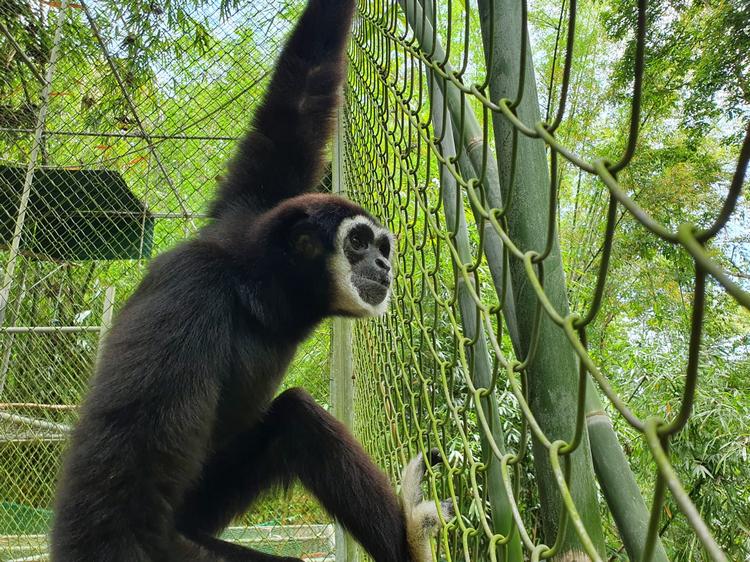 The Gibbon Rehabilitation Project relies on kind donations generated primarily from its visitor center in Phuket, which like most visitor centric activities had to shut down to external activities during the global Covid-19 pandemic. Behind quarantine however, the rescued Gibbons had to be continually looked after, fed and still taught how to become wild so that they could eventually become release candidates.

Full credit must be given to the founders of The Wild Animal Rescue Foundation Thailand WARF (the umbrella foundation that established GRP) and their team, who dug deep, both financially and personally to ensure the survival of this worthwhile project.

During this period, K. Pump the Secretary of WARF was also active negotiating the rescue of dozens of Gibbons scattered throughout Thailand. This renewed rescue effort is stretching the capacity of GRP in Phuket to breaking point, so K. Pump reactivated the Northern rehabilitation project at Mae On in order that good release candidates could be gradually moved from Phuket for release in Mae On district, Chiang Mai.

Restarting the release programme at Mae On sounds simple on paper, but there were many logistical hurdles to overcome.

After releasing 23 Gibbons previously at Baan Jam Pee, over the ensuing years, the manpower was reduced drastically in order to cut overheads. This meant recruiting a new generation of Gibbon Rangers for this phase of release from the surrounding villages, which is a lengthy process. 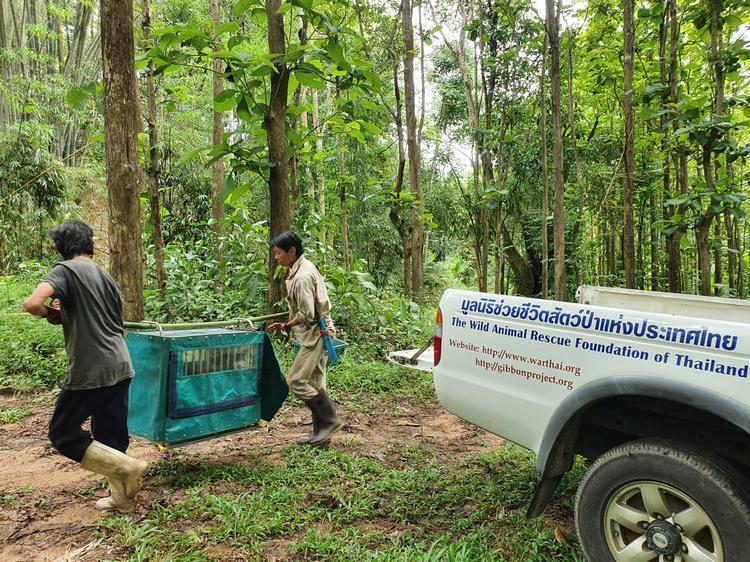 The second obstacle was the securing of suitable safe land around Mae On. Each Gibbon family requires about three Rai (4,800 SQM) of contiguous tree canopy for their habitat. Gibbons, arboreal apes, who rarely venture down onto the forest floor, nor is it safe for them to do so, since it increases the chance of encountering humans, are very territorial.

In recent years, large tracts of tree canopy have been destroyed by forest fires, or manmade firebreaks, significantly lessening the amount of contiguous tree canopy around the existing release site near Baan Jam Pee.

Through prolonged discussions and education campaigns, an understanding and agreement was reached, and additional sites were secured during the early part of 2022. 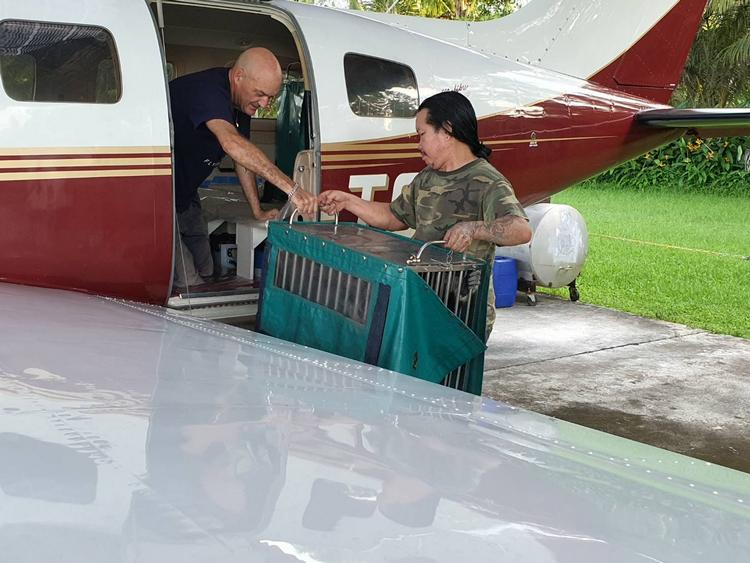 The last and final hurdle was the transportation of Gibbon release candidate families from Phuket to Chiang Mai. Happily this is where the Flying Scouts were able to step in, agreeing to airlift as many Gibbons as necessary to seed this next release programme. 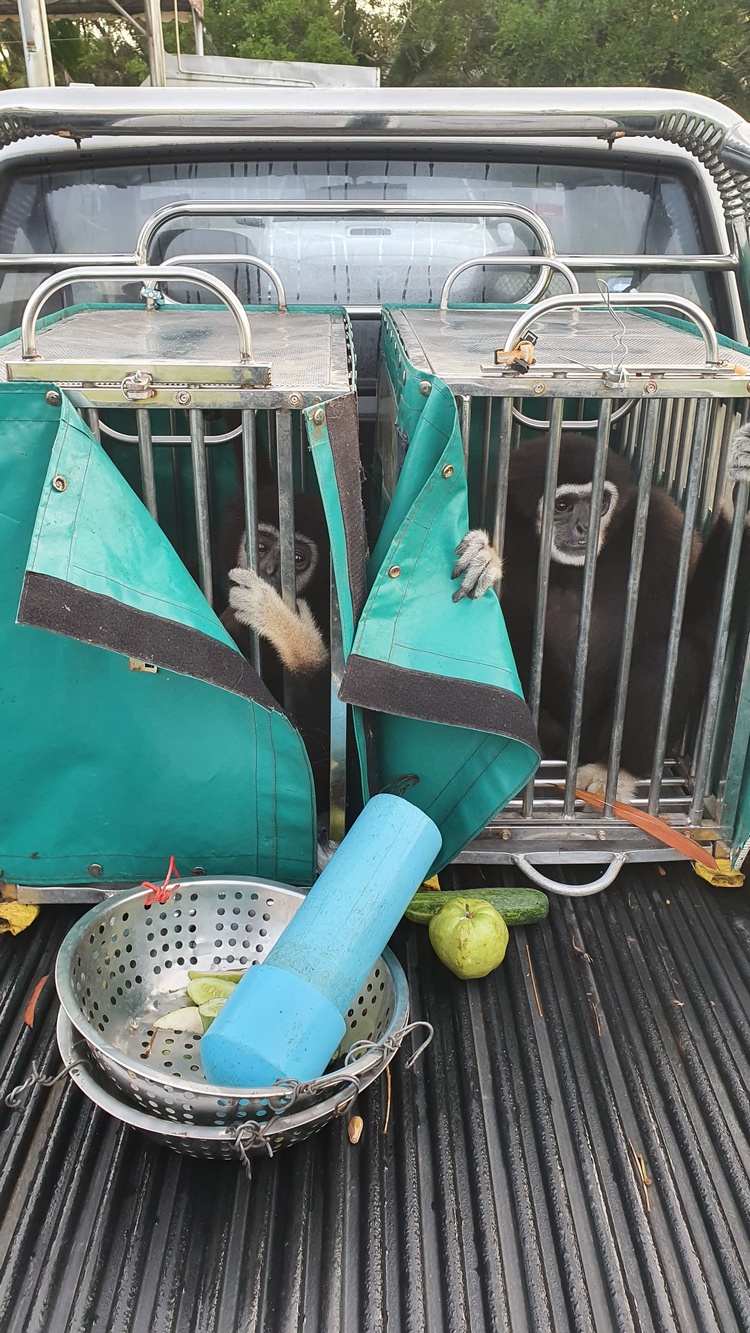 The first flight was conducted during early June 2022. Mother Jun, with baby Rahu and father Bangkluay were loaded during dawn at Phuket Airpark. 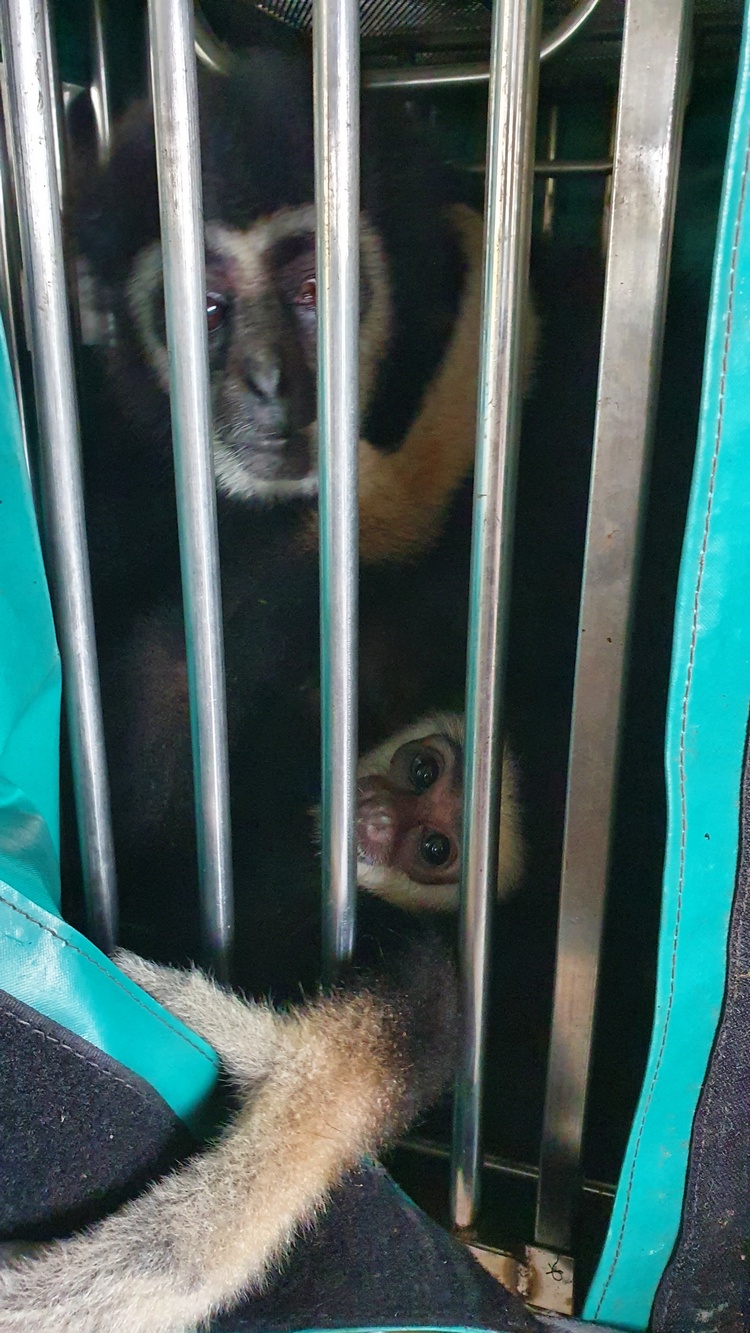 Both Phuket Airpark and Nok Airfield have been staunch supporters of the Gibbon Release project since it started. The Flying Scouts are very grateful to the owners of both airfields. 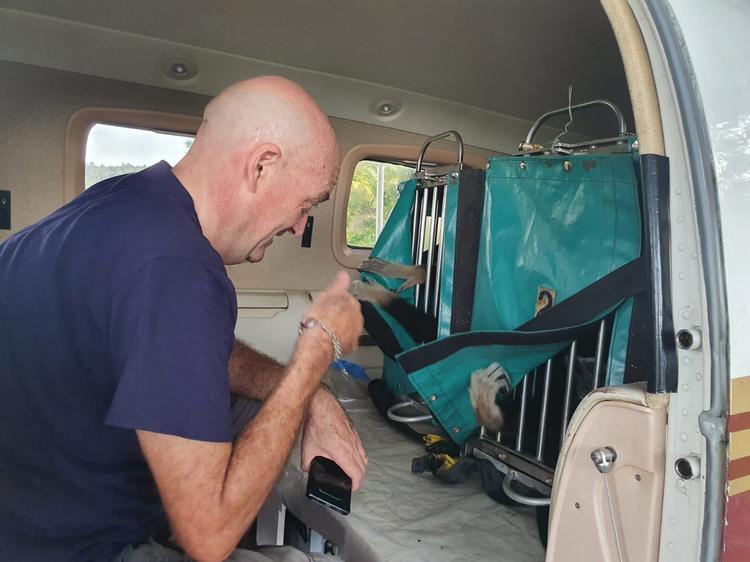 June started the monsoon season in Thailand with a vengeance, making planning further airlifts difficult and short notice affairs, but both the flight and ground crews rallied around and made the next flight happen mid June amongst some very challenging weather in Phuket. 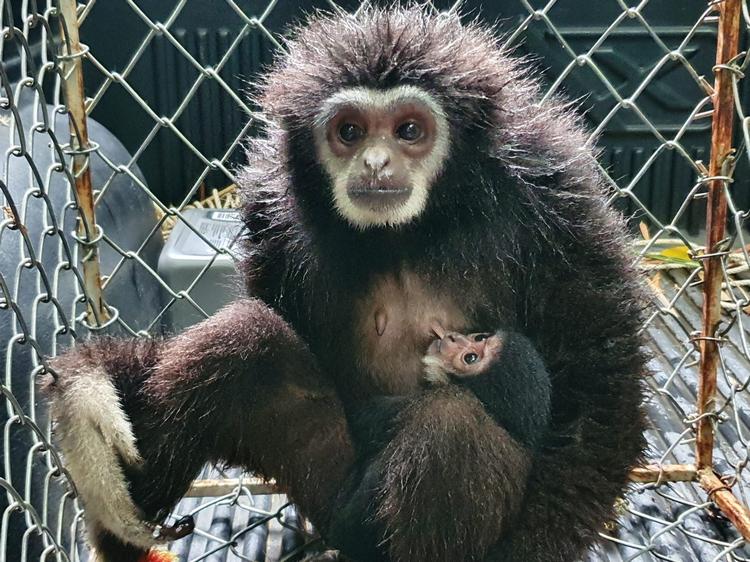 Mother Arya with baby Dontree – only a few months old, and father K. Sual made the next flight, all three were very well behaved even during a refuelling stop mid-way at Hua Hin.

The choice of established family units for release is a hard gained technique proven to improve the chances newly released Gibbons will adapt and thrive living in the wild after so many years in captivity. 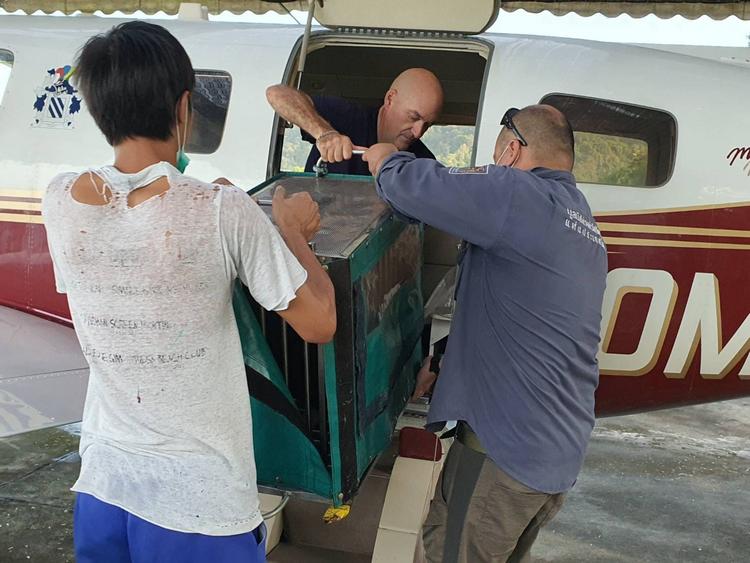 The latest airlift flight was conducted during atrocious weather conditions early July 2022. The initial attempt had to be aborted after a Tropical Cyclone disrupted the skies over Thailand for several days. Eventually, patience and persistence prevailed to take advantage of a weather window, although the subsequent take off from Phuket Airpark resembled a 4×4 rally race! 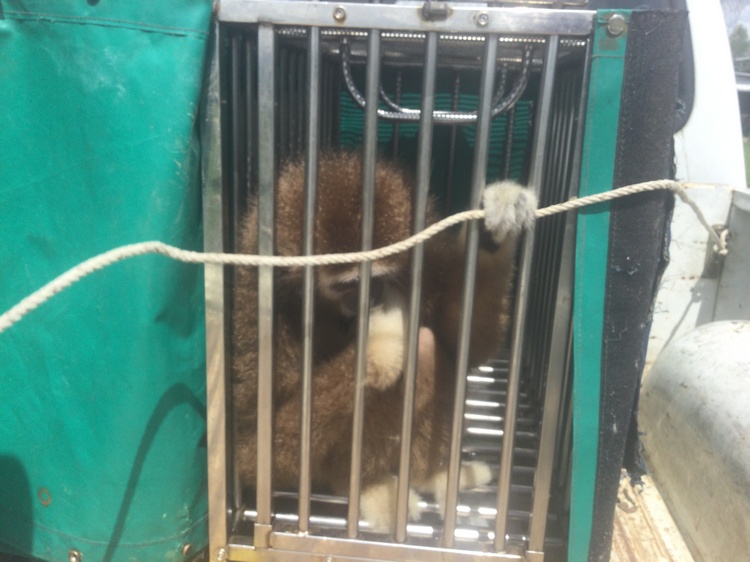 Emily and Willy were the lucky two release candidates on this trip, which was a non-stop flight from Phuket to Chiang Mai. Emily was a little distraught unless she had physical contact with Willy throughout the flight. 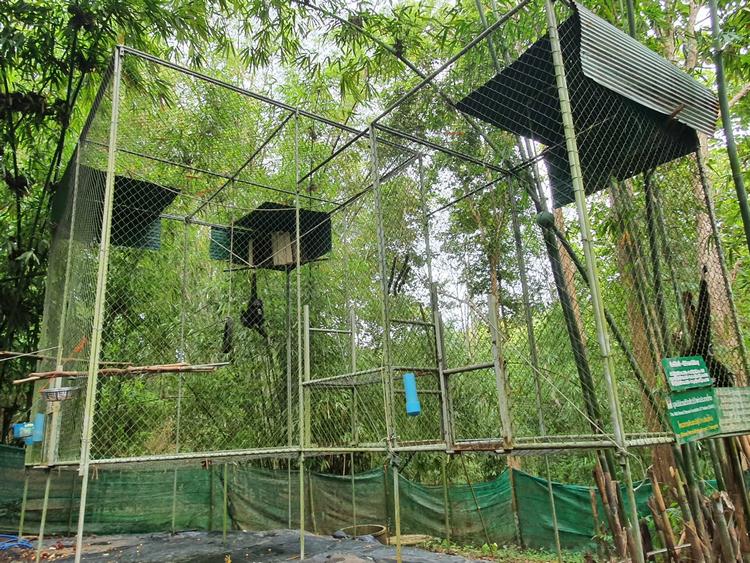 Three families is the current limit that can be managed at any one time in Baan Jam Pee due to manpower as well as cage capacity, so further flights will be planned once Arya and family are released in August, making room for the next family and hopefully allowing better weather conditions and a well earned rest for the Flying Scouts flight crew.

Rehabilitating Gibbons takes years of dedicated manpower. From start to finish it is a 6-8 year process per Gibbon, and there is no guarantee once released a Gibbon will survive or want to stay wild.