Bambam has developed a cataract 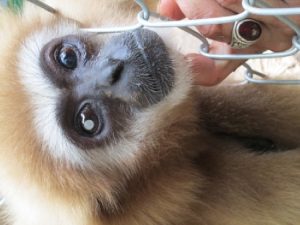 Unfortunately, Bambam has developed a cataract in her right eye, and a suspected infection in her left eye. Gibbons are susceptible to cataracts, but just like us humans, if diagnosed early enough, the eye can be operated on and the chances of vision restoration is high.

Bambam is being taken to Chiang Mai University, where a specialist surgeon will assess her for the operation.

Ever since Bambam has become ill, Santi has taken over the care of PeePoo, who now clings to him instead of her mother.

Due to this development, Bobby and Songkran will be released instead of Bambam, PeePoo and Santi on June 16th.

Sadly, after being assessed in Bangkok, Bambam’s case has been diagnosed as inoperable, and even worse, she has a cataract in her left eye as well, so she will soon go blind. 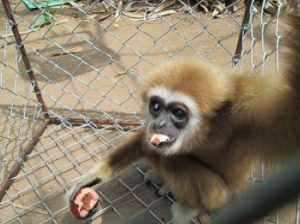 During her trip to Bangkok, Bambam was separated from baby Peepoo, who quickly became sickly, so Bambam has been reunited with Peepo back in Chiang Mai for the time being, but she will no longer be a candidate for release.
Everyone is shattered by this news.  All we can do now is make Bambam and family as comfortable as possible and take each day as it comes.